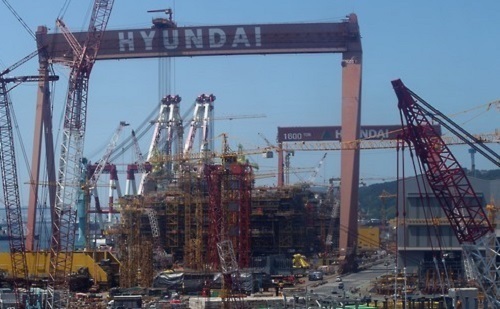 Amid tense labor disputes, Hyundai Heavy Industries is speaking out against its labor union, arguing that members are distorting information related to the industry’s business conditions, such as shipbuilding orders and operating profits for the year.

The union recently claimed the company received orders for 62 vessels totaling $3.8 billion from January to May, five times more compared to the same period last year, according to the union’s news agency. Given the figures, members of the labor union said they cannot accept the company’s claims that prospects for the second half of the year would be fiscally tight.

However, Hyundai Heavy officials are refuting the accuracy of the union’s figures.

“It will take at least eight months before we will be able to start construction on this year’s vessel orders,” the company added. “Therefore, from the second half of this year until the first half of next year, there will be a shortage of work due to sluggish orders from last year.”“The figure is not solely the order quantities for Hyundai Heavy Industries, but also Hyundai Mipo Dockyard and Hyundai Samho Heavy Industries,” a company official was quoted as saying by Yonhap News Agency on Wednesday. “Among all the shipping orders, we only received orders for 17 vessels.”

As part of efforts by the fiscally-strapped company to normalize operations, Hyundai Heavy announced plans to cut costs and debt by 3.5 trillion won ($ 2.98 billion), which means selling off its assets and lowering labor costs.

On June 17, the union announced that an industrial dispute had broken out among Hyundai Heavy management and its workers, hinting that the union is preparing for “powerful” strikes to refute corporate restructuring.

In February, Hyundai Heavy unionists went on a full-scale strike for the first time in 23 years.